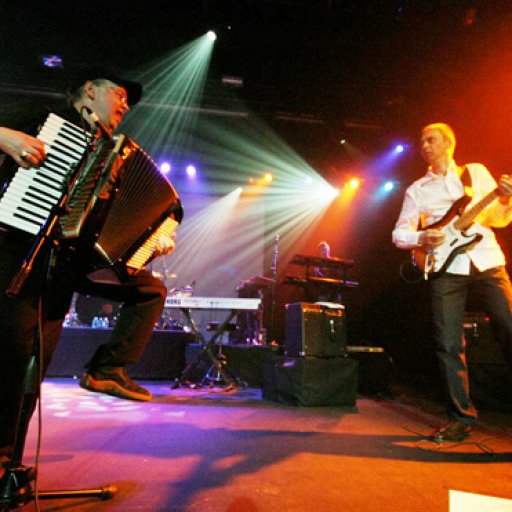 The music of Blair Douglas comes from the heart
and touches the soul.

Blair Douglas didn't need to buy his musical ability, he inherited it from both sides of his family. But genetics alone cannot explain this rare talent. What Blair has done over the years to hone and perfect his talents through good times and not-so-good times by dint of sheer hard and often thankless work. His musical expertise is a distillation of the tuition he received and the influences to which he was exposed, the years of playing and composing, and his recording and producing experience.

Blair was born and brought up in Skye. On his mother's side he has strong connections with North Uist while his father's people had moved to Skye from the Border country around 150 years ago. When he was 15 the family relocated to Glasgow but returned to their home in Braes after a number of years in the city.

Blair was inspired to buy an accordion after hearing the playing of the late, lamented Niall Cheòis of Lewis. In 1973, having quickly mastered the instrument he teamed up with Calum and Rory MacDonald, fellow Skyemen with North Uist connections. Together they formed the Run Rig Dance Band to play at the North Uist & Bernera Association concert in Glasgow. The band's background was in Gaelic/Highland music though somewhat tempered by exposure to rock so much so that part of their original repertoire allegedly included "gems" such as Whisky in the Jar and Snoopy vs the Red Baron, both classics for 70's cover bands.

During this time the band played mostly at the weekends allowing Blair to continue as a student at Glasgow University where he graduated with an economics degree. A short flirtation with a full time playing career in the late 70's proved unsuccessful and eventually led to Blair and Runrig (the 'Dance Band' tag having by this time been dumped) going their separate ways. However Blair did return to play on Run Rig's Recovery in 1981.

His first solo album, Celtology, came out in 1984 and featured songs rather than his better known instrumental style. Subsequent CDs are remarkable because the material is largely Blair's own. Beneath the Beret published in 1990 included Kate Martin's Waltz which became an instant hit with traditional musicians and remains a classic of the genre and Solus m'Aigh a beautifully haunting song which he dedicated to his friend Fr. Colin MacInnes. A Summer in Skye, many of whose themes are based on Alexander Smith's celebrated book of the same name was launched in 1996. Highlights on this album are A' Bhean Ionmhainn, The Landlord's Walk, and Nelson Mandela's Welcome to the City of Glasgow.

Angels from the Ashes, released in 2004, provided us with a beautifully crafted CD which, though being remarkable in its originality, is unmistakably the work of Blair Douglas. It features delightful airs, waltzes, and pipe tunes which are destined quickly to become part of the many pipers' repertoire. Laments include An Gaidheal Uasal for Donald Archie MacDonald, a collector with the School of Scottish Studies, a gentleman, and an exemplary Gael. The album also introduced a strong Cajun flavour to Blair's work.

In the tradition of many Celtic composers, Blair's music draws from the deep well of social and political injustice, both at home and abroad. The plight of the Gael provides the local backdrop while 20th century icons like Nelson Mandela, Martin Luther King and Michael Collins bring, through their own local struggles, an international dimension. Where some would have turned to anger and brought bitterness and cynicism to the table, Blair's music exudes hope and brings a different kind of fruit.