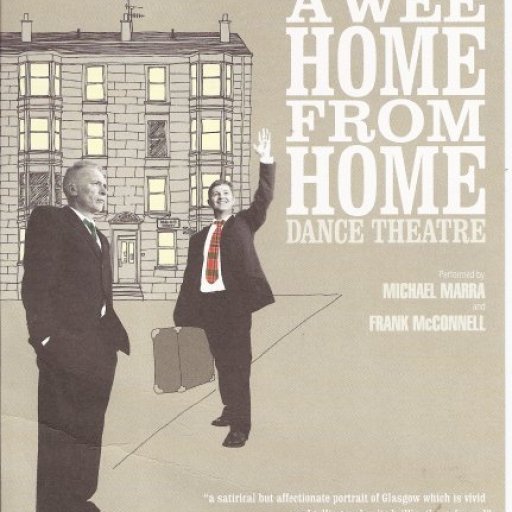 Read Full Biography
Biography
A Wee Home From Home | 06 November 2010
A Wee Home From Home will be performed on Saturday 6th November as part of the IETM Glasgow artistic programme that runs from 4-7 November 2010.  This 4 day, city-wide performance showcase will incorporate contemporary theatre, dance and live art, by many of Scotland’s foremost companies and directors, in a range of venues across Glasgow.

IETM (International Network of Contemporary Performing Arts) is Europe’s most significant membership organisation of its kind and 2010 marks the 20th  anniversary of Glasgow’s year as City of Culture.  The event will see up to 600 international delegates visit Glasgow and under the theme of ‘Voices’, the plenary will consist of an extensive programme of talks and performances over 4 days and will embrace the entire city, its people and its culture.

Director Gerry Mulgrew    Choreography Frank McConnell    Music Michael Marra
Design Karen Tennent   Lighting Design Jeanine Davies
Returning to Glasgow Frankie knocks on a door to find no one home.  With time on his hands he wanders the streets of his past and is swept up in the ensuing roller coaster of memories and emotions.  Twenty-one years after this gem of a show first played to full-houses and immense public acclaim, plan B have reunited the original creative team to bring A Wee Home From Home to a new generation. in the Year of Homecoming.  Performed by Michael Marra and Frank McConnell, the duo create a double act full of warmth and charm with undertones of menace. Using an eclectic mix of raw live music, inspired, high-octane choreography and powerful theatricality, the show opens Scotland to its own wounds while celebrating a vibrant and indominitable spirit with pathos and a huge dose of humour.
“Under the imaginative direction of Gerry Mulgrew, fingers and feet combine to produce a satirical but affectionate portrait of Glasgow which is vivid and telling and quite brilliantly performed”
THE SCOTSMAN
“A marvelous display of athletic humour and a powerful evocation of city life”
EVENING NEWS
"Robust and fiercely energetic"
THE TIMES